If you have been following my channel on YouTube, you know I’ve been talking about doing more live shows. In the midst of all this, a young man from England contacted me. Mark from the “Big Man In The Woods” channel asked if I would be available for a live chat on his channel.  Well, one thing led to another and we set the date for this coming Saturday, July 31st, at 3 PM (EST) this is 8 PM in London. If you have enjoyed Mark’s channel as I have then you know he is passionate about Scouting. I am looking forward to our discussion. Even if you are not going to join in the chat you should at least subscribe to Mark’schannel and check out some of his videos.

I have done a lot of Internet zoom meetings especially the past year with all the lockdown stuff going on. I have become very comfortable with live video. In June I hosted the BSA’s first International Virtual Cub Scout Day Camp. This was about 9 hours a day for two weeks of live video. I was so glad that Mark asked me to just sit and talk about Scouting in the United States. If you’re familiar with Mark’s channel you know that he is based in London England and the Scouting program was founded there before it immigrated to America. There are major differences between the two Scouting programs although the core values are the same.

I encourage you to set a reminder NOW to join us this coming Saturday. I will try to ask Mark some questions about living so close to Gilwell Park for us Wood Badgers.   YIS⚜

To say that 2020 had its challenges is a severe understatement. As adult leaders in this Scouting movement, we need to continue to prepare our youth for the challenging future. There are many unforeseen circumstances that we may not be aware of. Scouting is going through trying times and we believe that living up to the Scout Oath and Law will see us through. Charitable contributions to your Council are down nationwide over the previous years. This has a very real effect on the program & staff. One of the forgotten is your Scout Camp. Almost unused this past year because of the pandemic. However, maintenance costs and utility bills are just the same. A charitable contribution at this point would go a long way in preventing a Council from making hard decisions. Also, let’s not forget the professional staff of Scouting and remember them in our Christmas prayers. Let’s not just right off 2020 negatively because a lot of great things happened in the year. Scouting was finally pushed into the 21st century with the introduction of Girl Troops and Online/Virtual Scouting. I firmly believe that Scouting must evolve or go extinct. If you think about it scouting has gone through many changes over time and has always been there for young people. Let us never forget the core values of the Scout Oath and Law.

Adult leaders and parents are NOT exempt from the Scout Law. Have you ever really thought about it. Also the number one question we should ask all Scouts.

Definition as to there meaning:

Friendly – A Scout is friends to all. Scouts are a brother to other Scouts. Scouts offer their friendship to people of all races, religions, and nations and respect them even if their beliefs and customs are different from their own. B-P wrote about similar wording however he diverted into a social class. “No matter what Social Class the Other Belongs.” B-P was from the late 1800s and must think of his times and his revolutionary thinking. Today we would say he was “woke”.

Courteous – A Scout is polite to people of all ages and positions. Scouts understand that using good manners makes it easier for people to get along. B-P had similar meanings in his writings however, he added the line “And he (the Scout) must not take any reward for being helpful or courteous.”

Kind – A Scout treats others as they want to be treated. Scouts know there is strength in being gentle. Scouts do not harm or kill any living thing without good reason. Originally, “Kind” was oriented only towards the treatment of animals. This has changed shortly after World War II to reflect kindness to all creatures including humans.

History – The original writings of Baden Powell in the first Handbook are conveyed Similarly. Historically there were only 9 scout laws outlined originally. However Later the British scouts added Reverent making it 10 scout laws. Do you know which ones were added to the 12 American Scout laws?

The scout law is an amazing principle for real Action in one’s life. Putting each one of the scout law into a daily meaning can literally change the outlook of a young person. As scout leaders, we need to be the example, not the exception. Never forget that we are all obligated to abide by the scout law.

The number one question that every Scout leader and parents should ask of their Scouts. “What do you think I most want you to be?” A. Successful, B. Good, C. Smart, or D. Happy. The correct answer is “B” Good. You cannot achieve any of the others without being good. This question also helps calibrate how we are doing as leaders and parents.

The opening of many meetings is a flag ceremony. Has your unit practiced it? Should an opening prayer come before the flag ceremony? Yes, think about the Scout Oath (“God and Country”). Pledge of Allegiance, Scout Oath, Scout Law, and Outdoor Code. How many non-scout adults in America know how to properly fold the flag? Only 4 to 5% depending on location. Ask yourself, how many former scouts can still fold a flag? All of them? We never just burn flags in scouts. We respectfully retire them by cremation. If the flag touches the ground it’s only accidental or at worst disrespectful. It’s not time to run, and get the matches. Troops and Packs, most parents don’t know all the parts of a flag ceremony. So don’t freak out if it goes off wrong. As long as it’s respectful and you don’t point out mistakes then it’s all good. I was told by a leader that they had a parent tell them that they only get to recite the pledge (Pledge of Allegiance) at Scout meetings.

You’re invited to become apart of our scout leader community we have here on YouTube. With almost 250K views in 9 years*, only 0.003% of viewers of this channel are subscribers (not 8% as ScouterStan stated in the video). Even less have used the channel comments section. ScouterStan personally views and responds to all of the comments and questions. If you have a subject or a question that we have not covered please ask. Everything here is governed by the Scout Oath and Law. Tell your leaders in your Pack, Troop, or Crew about the ScouterStan Channel. “Don’t keep it a secret!” This channel is for adult leaders, but its content is always scout and family-friendly. Our goal is to have “Opal Level” (1K+) subscribers by our 10th Channel anniversary on March 12, 2021. This will unlock many community features for all of us here on the channel.

⚜️ NEW VIEWER: Most of the videos are “evergreen” here. If you’re just joining us now, try to limit yourself to just two videos a day to avoid overload. You can leave a comment on any video here and ScouterStan will reply. Don’t forget to tell your scouting friends about the channel. A thumbs-up 👍 is always appreciated. Thanks for joining us. 😊

🎵 The theme music used in Season Two of Commissioner Weekly is “Fargo” by Riot. You can download it from the YouTube Audio Library here: https://www.youtube.com/audiolibrary_download?vid=6187c94ae427bba6

🎨 The logo of the ScouterStan Channel was created by Eagle Scout Daniel Richards. It was inspired by the famous artisan R. Tait McKenzie “Ideal Scout” bronze statue (1937) that was just outside the BSA headquarters in NJ in the 60s. Logo Designer, Daniel Richards of OSHOBE Graphic Arts Company is available at http://oshobe.com.

When Seton started working on the “Boy Scouts of America Official Handbook” he collaborated with Baden-Powell on the Scout Law for the book. The original Baden-Powell 9 points of Scout Law was printed in the 1910 first edition on pages 32-34 (ref. Note & Link). Both of them worked out a 12 point Scout Law for the “second edition” published the following year. Using some inspiration from Seton’s Woodcraft Indian Law.

The Scout Sign is a common feature of any scout meeting. It demands our respect as it is a living symbol of our commitment to the Scout Oath & Law. This cherished symbol is also used to respectively and courteously quiets the room. Unfortunately, some scout leaders don’t wait for all the scouts to stop talking and scream out “Signs Up!” That defeats the whole point of quitting the room with the Scout Sign. Otherwise when you say “Signs Up” everyone just hears “Shut Up”. 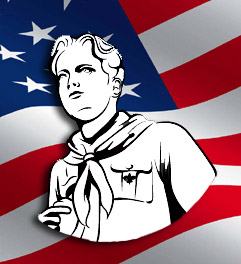 Welcome to the ScouterStan website!  I have been working on developing a unique website and I just couldn’t make it work the way I wanted.  So last week, I decided that I would install WordPress and started putting up blogs, articles, and more.  As a former web developer, I thought it would be an easy task to just whip something together. Originally the project started off good, however, I started to get stymied into more of a static site than I wanted.  The WordPress software out of the package is relatively easy to install and set up.  It even came with an “office plant” (look above).  I think I will move the furniture around a little and decorate later.  For now, I’m going to leave the ability to make comments on the site.  Just keep in mind everything will be screened as I wish to stay family friendly.  Just keep the Scout Oath and Law in mind and we shouldn’t have any problems.  Now I just have to figure out how to water that plant…

Like they say in the SOUTH of France…  Au revoir Y’all !